Sign up to our Jack Move: Datablast for news and updates! 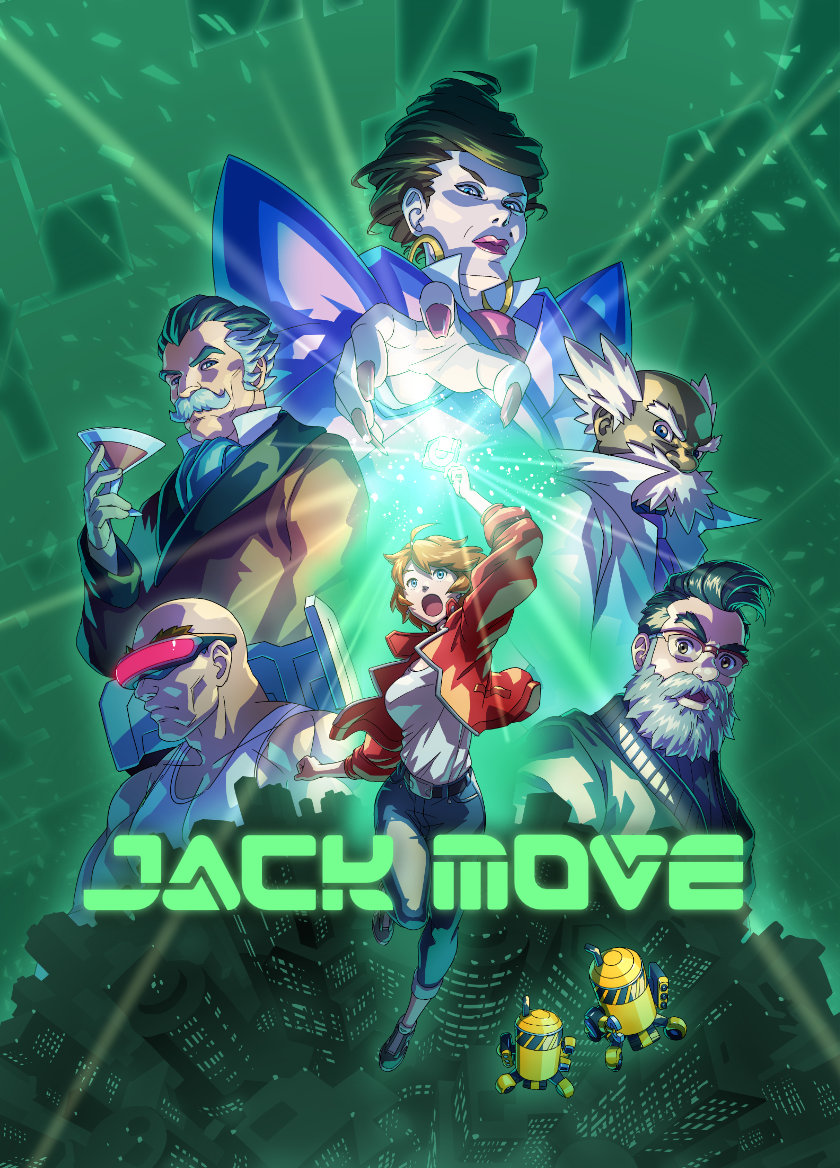 Jack Move is a cyberpunk themed Japanese style RPG. Jack Move is set in a “VHS-era” cyberpunk city filled with high-tech and low-life. Inspired by the novels of William Gibson, 80’s computer interfaces and films such as Strange Days, Akira & Bladerunner. The game features beautiful modern pixel art, a unique turn based battle system and an 8 to 10 hour campaign. Players take on the role of Noa, a vigilante hacker who is thrust into a world of murder, kidnapping and dark research after her father goes missing.

Grab the press kit from here

The single party member system allows for exciting and tactical battles. Customise the software of your Cyber Deck to switch roles mid battle, balancing offence, defence and buffs. Choosing which software you load during a battle is the key to victory! Hardware upgrades can help boost your stats, increase the amount of software you can install or give Noa extra abilities.

They whisper her name on the streets: Solares.

A mysterious veteran of the Data Wars, she keeps the fight against the Corporations alive as a vigilante hacker-for-hire, empowering the downtrodden and undermining those with power.

When she receives an emergency message from her estranged father - the eccentric Dr. Abner Solares, whose wife’s death spurred him to become the leading researcher of ‘digital reanimation’ - Noa is thrust into a world of murder, kidnapping, dark research, and the corporation that would steal it for their own ends: Monomind.

Designed from the ground up to be playable with controllers or keyboard, Jack Move is being developed for PC and Nintendo Switch.

Jack Move is being published by Hypertrain Digital and is on track to be released in 2021.

So Romantic is a UK/Taiwan based, one-man micro studio started by Edd Parris. Edd previously worked at Mediatonic on titles such as Heavenstrike Rivals (Square Enix) and Fantastic Beasts: Cases from the Wizarding World (Warner Bros), before striking out on his own as a freelance Unity developer. Edd handles production, design, code and background art whilst working with talented freelancers.

Edd Parris - Design, environment art and programming
Edd has worked in games for 6 years. At Mediatonic he worked on titles for Square Enix, Disney and Warner Bros. He has had personal work shown at Rezzed, Wild Rumpus and Fantastic Arcade. He has previously organised the developer community meetup Brighton Indies and the yearly Games by the Sea party.
Joe Williamson - Lead character design and animation
Joe is a multitalented game developer, pixel artist and musician. He is an avid game jammer and Ludum Darer. He has worked for DoubleJump and Kongregate. Joe is also a magician!
Fracture - Music
Fracture is a connoisseur of fine cuisine and hot sauces. When he’s not in the kitchen, he can be found running the Astrophonica label and releasing on pioneering British dance music labels such as Metalheadz and Exit Records.
Adam Hay - Sound design
Award winning sound designer Adam Hay has worked on titles for Rare and Frontier Developments, as well as The Chinese Room where he won a Bafta for his work on Everybody’s Gone to the Rapture.
Amalie Kae - Writing
Game writer, narrative designer and published novelist. Backed by a degree in Games Design from University of the Arts London, Amalie strives to make video game narratives something truly special.